There is a public discourse happening beyond the trolling, internet bullying, and death threats. It is taking place on a local and national level, and it is crucial for the future of America. We must not allow corporate media and their obsession with false equivalencies, red herrings, and battle royales distract us from the issue at hand: #BlackLivesMatter.

We must move beyond the obvious disagreements with obvious bigots, and go beyond the “fuck them” part of the conversation. This is a call to continue and, in some cases, start conversations with those of us who are ready to accept that there is something deeply wrong with our sociopolitical system. It’s for those who are willing to ask how our individual and collective actions reinforce America’s systemic injustices.

“Protest beyond the law is not a departure from democracy; it is absolutely essential to it. ”

This latest round of rebellions draws on a time-honored tradition and a beautiful history of pushing this country forward through agitation. From one of America’s most popular acts of civil disobedience, the Boston Tea Party, to Susan B. Anthony’s arrest for voting at a time when women were prohibited from doing so. From Claudette Colvin and Rosa Parks refusing to give up their seats on the bus for white folks, to the many being arrested in opposition of the Keystone XL Pipeline. Civil Disobedience is as American as selective historical amnesia.

In light of recent direct actions in support of the Black Lives Matter movement in Boston, in which protesters locked arms on I-93 during the morning rush hour commute, many people are asking questions about what this moment means for their communities. Sadly, in some circles the actions of the protestors elicited more rage than the chokehold murder of Eric Garner at the hands of New York City Detective Daniel Pantaleo.

“Washing one’s hands of the conflict between the powerful and the powerless means to side with the powerful not to be neutral.”

Make no mistake: For many, this nation’s current unrest is bigger than Michael Brown, Eric Garner, Tamir Rice, Aiyana Jones, and the countless other unarmed black and brown men, women and children who have lost their lives at the hands of law enforcement in the United States. These murders have rekindled a fire that has never fully been extinguished, and that has been burning for centuries. From daily microaggressions, to more extreme acts of domestic terror, from the School-to-Prison-Pipeline to the War on the Poor, the effects of ideological and institutional oppression have wreaked havoc. As such, lines have been drawn in the sand and allegiances are being chosen, with only one side believing there has been a disproportionate amount of pain and anguish inflicted upon this country’s Black community. Conversely, there are those who have seemingly mastered cognitive dissonance, and who choose to ignore systemic injustices. In the most basic terms, you either acknowledge that white supremacy and racism are interwoven into the fabric of American society, or you do not.

Which side are you on?

Those who do not believe we are in a system with severe inequities have placed the onus on Black folks, and in the case of the I-93 action their accomplices, to convince deniers that their pain and struggle is not only real, but that it is systemic and worthy of such distrust and unrest. Therein lies the root of much interpersonal tension; it is a ridiculous expectation that Black folks should have to prove their own humanity.

“Where justice is denied, where poverty is enforced, where ignorance prevails, and where any one class is made to feel that society is an organized conspiracy to oppress, rob and degrade them, neither persons nor property will be safe.”

Acceptance is a beautiful ideal. But the pragmatic idealist in me remembers the words of my father. He, with my mother and sister, arrived in Boston from Puerto Rico in the 1970’s during a tumultuous and racially motivated busing crisis to find a largely disenfranchised Latino community that was fighting to be heard. He said, “Although we knew we would not necessarily be accepted, we would do the work to be respected.” For many of us, owning the fact that we will not be accepted by others because of our differences can be hard, but it is necessary and liberating work. Opposing forces and ideologies may never accept us, and we do not need them to, but we must do the work to be respected.

And we must ask questions: What can come from creating traffic jams and angering commuters? What can come from bringing lives to a standstill? Like many others I have questions about the strategy employed by those with whom I write in solidarity. Not because I want to tear down demonstrators, but because I truly want dissent to make an impact. No one is beyond critical love. While I won’t attempt to speak for the protesters who have already spoken for themselves, I have inquired of myself: “Would I have participated? Would I have helped jam rush hour?”

My genuine answer, in all likelihood, is no. That does not conflict with my solidarity though; in fact because I wouldn’t have done so, and because they so courageously did, I am especially grateful for their actions. Organizers must have known there would be backlash, and yet it did not stop them. I applaud their courage. Even if their actions simply spark more conversations that opposing ideologies would love to sweep under the rug, that within itself is a victory.

There are moments when it feels effortless to understand other peoples’ perspectives on polarizing issues, such as race in America. There are other times when it feels impossible. I have learned that there are people who seemingly refuse to think for themselves and refuse to question the system’s doctrine. Digesting, regurgitating and spreading its poison like a highly contagious virus. We have seen its mob mentality, its group think that refuses to isolate itself and attempt to look beyond its own stake in reality. Rather than approaching different perspectives, they double down on their ignorance. This was evident in peoples’ responses to the protesters in Boston and across the country. Many of these people are deeply committed to not entertaining anything other than their own lived experiences and pathologies. This willful ignorance – I am convinced – is oppressed people’s greatest enemy.

“Over the past few years I have been gravely disappointed with the white moderate. I have almost reached the regrettable conclusion that the Negro’s great stumbling block in his stride toward freedom is not the White Citizen’s Council or the Ku Klux Klan, but the white moderate, who is more devoted to “order” than to justice.”

The very idea of justice and equity, especially for marginalized people, has never been embraced by the masses in America’s dominant culture. Nevertheless, people all around us are choosing to participate in this awakening, voicing their frustrations and voicing their outrage. We have an opportunity to embrace a stronger, interconnected, intergenerational movement. We must give ourselves permission to ask the questions and continue to work toward answers.

If protesters practice civil disobedience in a forest and no one hears it, witnesses, reports it, or reckons it, does it make a sound? Does it make a difference? Does it amplify dissent? Does it challenge the status quo? Furthermore, what are the actual desired outcomes, and how can we use these moments to educate, to learn, and to grow as a society? How do we effectively challenge and dismantle a system that activist author bell hooks pointedly described as white supremacist, capitalist, patriarchy? Context is everything. This is a country that is at extreme odds with its own narrative of justice and liberty for all.

A country whose birth story coincides with the displacement and attempted genocide of indigenous peoples. A country that went on to build its economy on the backs of one of history’s most despicable atrocities, the chattel slavery of captured African people. Humans were sold and forced to work colonized land. They faced brutal punishments. Families were torn apart, women raped, dissidents hung from trees like “strange fruit.” Thug slave owners so dependent on this free labor that many of them gave their lives defending the institution. This country has not yet come to terms with much of our dreadful history. Many have naively wished it away, ignored it, or simply don’t see the connection of America’s inception to the plight of today. Without a historical context though, how can one make sense of recent uprisings? How and when will we dismantle systemic injustices? Who is willing to admit they don’t have all the answers?

Mallory Hanora, one of the protesters arrested on I-93, said “Too often we confuse safety with our own comfort. I hope we can move away from comfort and towards justice. The police will not stop killing Black people—isn’t that dangerous? Isn’t that violent? It is necessary and urgent to take significant actions to address the systemic oppression of Black people; white supremacy is deadly. Because Black lives matter all the time, always.”

Maybe, we should all take a moment and stand on the highway. Or at least stand with the people who do.

I say it plain,

America never was America to me,

and yet I swear this oath—

Eroc Arroyo-Montano is a founding member of the Hip Hop group Foundation Movement. An educator, artist, activist and a proud father of 3. 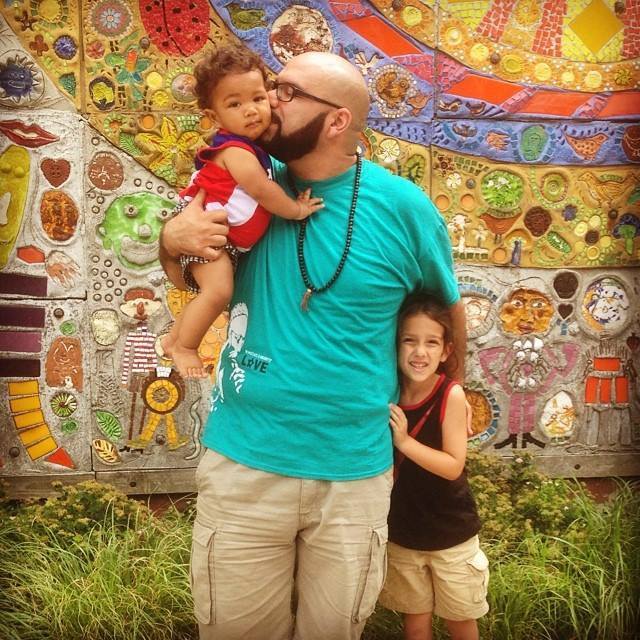 “I have come to believe over and over again that what is most important to me must be spoken, made verbal and shared, even at the risk of having it bruised and misunderstood.”